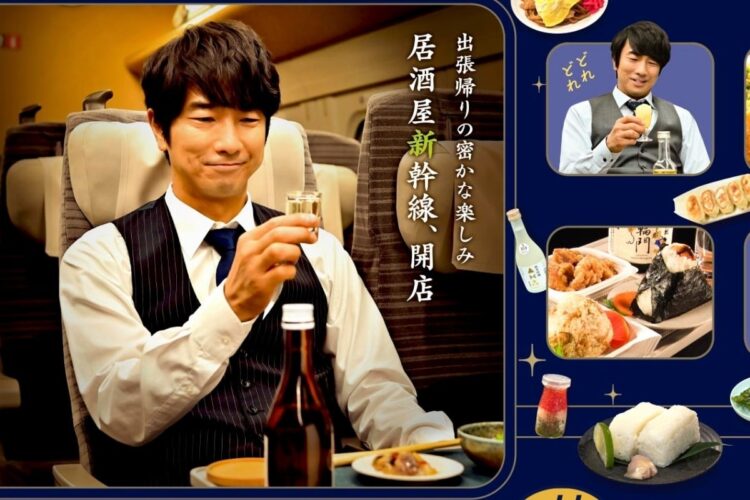 Izakaya Shinkansen may become the next Midnight Diner or The Lonely Gourmet if it ever makes it to Netflix, Amazon Prime, or Disney+.

Japan’s Salarymen Can Relate to This Show

First, you need to learn two keywords in Japanese to appreciate this story.  Izakaya (居酒屋) is the Japanese word for bar or pub—especially one with good food or “pub grub.”  The other word to study is shinkansen (新幹線).  Since this revolutionary high-speed train was first launched back in 1964 just in time for the original Tokyo Olympics, the shinkansen (新幹線), which means “new trunk line” in Japanese, has been more popularly known outside the country as the “bullet train.”  Combine these two words and you get the title of the new sleeper hit TV show Izakaya Shinkansen.  Thus, the title directly translates as “bullet train pub.”

It may seem a bit out of context given the relatively sterile and normally quiet environment of the bullet train, but the title is particularly fitting.  It is, after all, not uncommon to hear the sound of beer cans being opened and experience the scents of local specialties escaping from their packaging to fortify a “salaryman” on their way home on any given evening in one of the carriages of the bullet train.

That very image is what sets the scene for the TV show Izakaya Shinkansen.

The Premise of Izakaya Shinkansen

The main setting of the drama, which airs in the middle of the night beginning at 1 a.m. across the country, is inside a bullet train.

The main character, played by the talented actor Hidekazu Mashima (眞島秀和), is an internal auditor at an insurance company who often makes day trips to the countryside to check the books of his firm’s local offices.

While a mild-mannered “salaryman” by day, Mashima reveals his inner foodie on the way home.  As there are few options available on board, before getting on the bullet train for the return trip to Tokyo, Mashima seeks out local delicacies such as ekiben (boxed lunches or dinners sold at a train station), local cuisine, sweets, and regional sake and/or other spirits.

While he dines alone in his seat on the train, Mashima shares his meals via LINE, the most popular SNS service in Japan, with a network of friends and colleagues.  His patrons all seem anxious to learn what Mashima has found for each return trip.  They live vicariously through him.  This social distanced method of sharing a good meal and some alcohol thus mimics the actual experience of going out with friends to a real izakaya.

A Show for Foodies

Japan is a nation of foodies, and it goes without saying that there is much more to Japanese cuisine than just sushi.  Regional specialties abound and are often packaged in convenient sizes perfect for onboard dining.

Mashima could always opt for the easy way out simply by grabbing a quick meal-to-go at any of Japan’s ubiquitous convenience stores, but where would the fun be in such a choice?  Although there is a greater selection at a typical Japanese convenience store than what we are used to in the west, the menu tends to be fairly standardized throughout the country. Mashima wants to inject something special into his routine.

He goes out of his way to select local specialties that are only available at local markets, in the vast food courts in the lower levels of a department store called depachika (デパ地下) in Japanese, or at a particular train station.

His preference for taking the path less taken when it comes to selecting his dinner has helped Mashima to generate a large network of fans who are curious to see what he has selected.

Use of SNS as a Sign of the Times

Unlike previous incarnations about solitary Japanese foodies, the show’s creative use of SNS messaging is a modern sign of the times.

Mashima’s texts have generated quite a buzz in real social media.  The show has become a trending topic on Twitter five times, which is almost once per episode.

Some fans are even fantasizing about meeting the main character in their dreams!  Tohoku Nomashima tweeted,

Perhaps I was tired, but in my dream, I saw Hidekazu (Mashima)-san…For some reason, I was invited to a drinking party hosted by Kei Tanaka, and I met Hidekazu on the spot. I bowed down by the divinity of the scene. And at the end of the party, I exchanged lines with Mr. Hidekazu. He would often drop me a line to say that he was here to film an upcoming drama! It was like a dream! Good morning, MASHI-MANIA!

Perhaps the real reason why Izakaya Shinkansen is keeping up its fans until the middle of the night is that it is a show that celebrates the routine of an ordinary salaryman.

The real corporate face of Japan, Inc. is, arguably, the salaryman office worker.  Many of them make frequent day trips out of Tokyo just like Mashima’s character.  Armed with a modest expense account, the modern-day salaryman often finds pleasure in small extravagances like splurging on a slightly more expensive local food or drink to enjoy on the long train ride home.

Keep in mind that many Japanese companies still provide employees who travel for business with a fixed per diem allowance rather than having them submit actual expenses for each item that they consume.  Thus, associates like Mashima’s character can, for example, scrimp on lunch to save up their daily allowance for something special at dinner.

If you want to learn more about salaryman culture, the definitive English language resource is The Salaryman:  An American Dude Becomes a Tokyo White-Collar Warrior by Michael Howard.  Read my review of this classic in Japan Insider.

I recently caught up with Michael to get his take on Izakaya Shinkansen.  He summed it up perfectly,

This show is another perfect example that proves my book’s theory that there is no country on Earth with a closer symbiosis between white-collar strife and nocturnal consumption!

Although Izakaya Shinkansen was filmed on a production set rather than on an actual train, the seats and other components of an actual E5 series bullet train car were, apparently, provided by JR East Japan.  It is the operator of the Tohoku route of the bullet train that was the subject of the first season.  The food and drinks featured in the show are also all real local delicacies.

Izakaya Shinkansen Is a Boon for Purveyors of Regional Specialties

Although Izakaya Shinkansen has only been on the air for a single season thus far, the show has already sparked a mini boon for local tourism in the northern part of the main island of Japan, which is connected to Tokyo by the Tohoku Shinkansen.

The show’s popularity is, in fact, generating a boost in sales for many of the specific local specialties and Japanese sake featured by Mashima.

The food is not fictional.  Anyone can find Mashima’s actual choices in stores or online.  Some local supermarkets now feature in-store displays of the actor in front of the actual items showcased on TV.

Mashima interacts with local shopkeepers to introduce key attributes of each product. Many items have sold out in the days immediately following a particular episode.

What’s in store for the future of Izakaya Shinkansen?

Izakaya Shinkansen is definitely not “on track” to be a one-hit-wonder.

Businesses in Japan are still restricting domestic travel due to the ongoing pandemic.  As a result, many salarymen who may be looking forward to resuming the practice of making frequent business trips are encouraged by this drama.  The inaugural season featured Tohoku bullet train (colored in green on the map), but some fans are already looking forward to a series on shinkansen trains in other parts of the country.

At the very least future seasons may find their way closer to prime time.

Linked to an Extensive Library of Manga

The story of Izakaya Shinkansen has its roots in manga.  The writing group Amamiya Salon (天宮さろん) collaborated with the Kadokawa Publishing Company and East Japan Marketing & Communications (part of the bullet train service) to develop the original script.  Manga artist Koma Natsumi (夏見こま), which is likely a pen name, then brought it to life as a manga.

In Japan, there are lots of similar stories that have been popularized in manga.  Some, such as Tetsudo Izakaya Tsubame (鉄道居酒屋つばめ), feature specific train lines—including the E5 series of the Tohoku bullet train featured in Izakaya Shinkansen.

On the little screen, Izakaya Shinkansen seems to be the natural successor to previous global hits such as Midnight Diner (深夜食堂), Samurai Gourmet (野武士のグルメ), and The Lonely Gourmet (孤独のグルメ).

Given the home-grown success of Izakaya Shinkansen, it seems highly likely that Netflix, Amazon Prime, or even Disney+ may dub it into other languages for more of an international audience.  The genre has certainly proven to be a winning formula for success in the past.

Izakaya Shinkansen features just enough modern quirks such as its reliance on SNS to make it that much more relatable to a younger audience.  It seems, therefore, like it is only a matter of time before the show gains more of a global audience via one or more of the international streaming services.

As a fellow foreign salaryman based in Japan, Izakaya Shinkansen hit home on multiple levels.  It is a classic depiction of how ordinary people can find joy in life’s simple pleasures.  The show is also the perfect avenue for aficionados of Japanese food to gain exposure to the world of regional specialties from across the country.  Let’s hope it becomes accessible to international viewers soon.