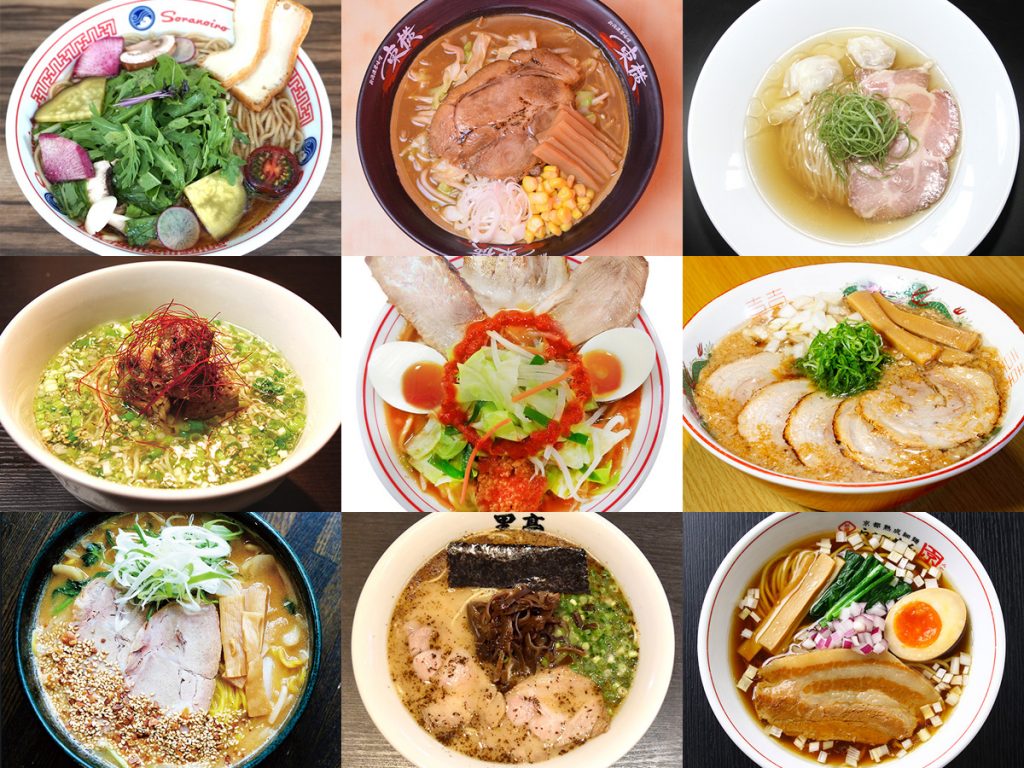 The Top 3 Most Popular Types of Ramen in Japan

Check out the top 3 most popular types of ramen in Japan according to Japanese people themselves. Don’t get too hungry!

Different Types of Ramen Across Japan

Mmm… Ramen.  The combination of a tasty broth, wheat noodles, and the toppings of your choice.  Simple, yet very effective.  With all the variations and the different types or styles of ramen, there’s always a perfect hot or sometimes cold, bowl, or “cup” of ramen or instant ramen for any occasion.

Now, a national dish of Japan, hundreds of thousands, maybe even millions of bowls of ramen are likely consumed daily in Japan alone.  While you’ve likely heard of shoyu (soy sauce) and miso ramen (as well as chicken flavor or beef flavor when it comes to the instant stuff), almost every prefecture in Japan has its own variation of ramen and is home to thousands of unique ramen shops with their own twist on things.

The Many Types of Ramen Across Japan

While the sometimes small differences between prefectures can be harder to detect, differentiating between regions of Japan and their ramen of choice is much more apparent.  For example, Hokkaido, the northernmost island of Japan, is famous for miso ramen topped with ground pork rather than slices of pork. Kyushu, the southernmost major island of Japan, is known for tonkotsu ramen, made using pork bone broth.

Apart from Hokkaido’s miso ramen and Kyushu’s tonkotsu ramen, an array of different types of ramen exist across Japan including Ie-kei ramen from Yokohama, made with a soy sauce-based pork broth usually referred to as tonkotsu shoyu, which literally translates to “pork bone soy sauce.” There is also Tokyo-style ramen made from soy sauce-based chicken broth.

While the toppings can differ quite a bit, it’s often the broth or soup that the chewy noodles we love sit in that varies the most. In fact, sometimes there’s no soup at all, like when it comes to maze-soba or abura-soba, a bowl filled with noodles and all the toppings you’d often find atop a bowl of ramen, along with a small amount of a more concentrated sauce that you mix all together before chowing down.

While I’ve listed a few of the different types of ramen, the list goes on and on.  While we could go on and on talking about the types of ramen, and ultimately help you find the type that seems like the best fit for you, why not have Japanese people rank their favorite types so you don’t have to?  The good news is, Natorabo News has done exactly that between January 31st, 2021, and January 7th, 2022.  So let’s take a look at the top 3 types of ramen in Japan.

The Most Popular Ramen Types in Japan

Torigara shoyu is a lighter, less viscous soup and is generally a brownish color.  The natural oils from boiling down chicken bones combine with the soy sauce and other ingredients beautifully, making an amazingly tasty and aromatic broth for both noodles and toppings!  Ginger and green onion combine not only to enhance flavors but also to remove the “dullness” or “stink” from the chicken bone broth.

Since torigara shoyu ramen utilizes a lighter broth than other types of ramen, the noodles used are often thin, chewy, and sometimes more curly than the straight noodles found in tonkotsu ramen variations, for example.

As far as toppings go, this type of ramen is usually pretty standard in that you’ll probably get a slice or two of chashu (braised barbeque pork), green onion, bamboo sprouts, a fish cake, nori (seaweed), and a soy-flavored boiled egg.

This type of ramen originated in Tokyo and while great on its own, it can also be used as a base for shio, salt, or other types of soy sauce-based ramen as well.

Next up is miso ramen.  Miso ramen, as mentioned earlier, originates from the northernmost island of Hokkaido in the city of Sapporo, where winters can be rough.  It is truly a uniquely “Japanese” ramen as other forms were variations of Chinese-style noodles that eventually came to be Japanese ramen as it was modified for the Japanese palette over time.

Because Hokkaido’s snowy winters can be so rough, miso ramen broth is a lot thicker compared to shoyu or tonkotsu based broths to help fill you up and warm you up.  Miso, fermented soybean paste, is usually combined with chicken or fish broth to create the base for miso ramen.  Lots of lard is used not only to make it taste better but so that the soup stays piping hot throughout your meal.

Thanks to the amazing flavor profiles of miso along with the toppings and melted butter, miso ramen smells and tastes pretty different from other types of ramen, but equally as good, and for some, even better!

While miso ramen may have originated in Sapporo, nowadays variations can be found all throughout Japan with many ramen shops specializing in it.

The most popular type of ramen in Japan voted by Japanese people is tonkotsu shoyu ramen made using a broth mixture of tonkotsu pork bone broth and soy sauce-based broth.  It’s kind of like a hybrid between the tonkotsu ramen of the South and the shoyu ramen of other parts of Japan.  While not all hybrid things are accepted by all at first, like the Prius, tonkotsu shoyu ramen on the other hand, was so delicious that it caught on right away.

Because this is “hybrid” ramen, some shops serve thin noodles, while others serve really thick and chewy ones.  This means that there aren’t any “rules” regarding toppings or other broths you can mix in to concoct all kinds of tasty new dishes and since it’s not as strong as traditional tonkotsu which can have a distinct smell, each of these newly added ingredients have the chance to shine.

Nonetheless, the toppings that are usually found on tonkotsu shoyu ramen include chashu pork, green onion, and a soy sauce flavored boiled egg.  Of course, depending on where you have it, the toppings may be more similar to Tokyo style torigara ramen, or more like Kyushu’s traditional tonkotsu which often only has chashu pork and green onion.

The one thing you can be sure of is that no matter where you have it, it’ll probably be delicious!  Enjoy!