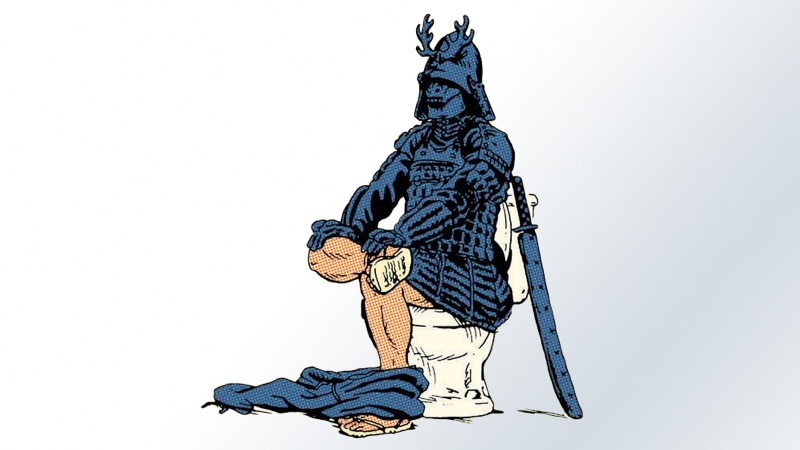 They say the proof is in the pudding, but this time, the proof may be in something else. Understanding early Japan through our poop.

Early Japan Is More Than Samurai and Ninja

When people think of ancient Japan they usually visualize warlords, samurai, or even ninjas battling it out for control over the island nation.  Except, here’s the thing, that kind of samurai and ninja stuff we often think of didn’t happen that long ago, at least, in terms of Japanese history.

In fact, the earliest evidence we’ve found of people living in Japan dates back to 30,000 BCE, and that’s prehistoric times.  While there are a lot of very, very interesting things that took place since then, including the Jomon and Yayoi Periods, once we get to around the 4th Century or so, the history of Japan begins to be much clearer as a lot more history was being recorded.

Today, however, we’ll be looking at the end of the 7th Century, and the beginning of the 8th from the year 694 to 710.  Just to be clear, that’s pretty much 1,000 years before the “samurai and ninja battle” era we see in movies.

The Proof is in the… What?

While we do know a fair amount about what 7th Century Japan was like, we don’t know everything. However, newly discovered evidence might help us understand that era in Japanese history better.  The only problem is, that “evidence” was found somewhere you probably wouldn’t want to look.

They say the proof is in the pudding, but this time, the proof is in our poo.  Yes, archeologists who were excavating and examining the sites of some of Japan’s early flushing toilet and sewage systems found new evidence that a lot more foreigners may have resided in Japan far earlier than previously thought. Until the recent discovery, it was thought that foreigners only came for short periods of time on diplomatic or religious missions.

Before we get into the mud and talk about what our poop has to do with this whole thing, we need to understand a bit more about 7th Century Japan for everything to make more sense later on.

The years between 694 and 710 fall into Japan’s Asuka Period (538 to 710).  During this period, Japan was going through lots of cultural changes such as severing its diplomatic relations with China, establishing itself as its own entity,  and strengthening ties with the Korean kingdoms. The period started with Buddhism making its way into Japan via the early Korean kingdom of Baekje. Ever since, Buddhism has coexisted alongside Shintoism, Japan’s native religion.

Near the end of the Asuka period, the imperial capital of Japan was known as Fujiwara-kyo, which was located in present-day Kashihara, Nara Prefecture.  The city was formally made into a capital in 694 when Emperor Jito moved there.

Fujiwara-kyo was Japan’s first capital city made under the Chinese style grid system and was quite large for a city of its time, covering an area of around 5km (3 miles).  As a former large imperial capital of Japan, it makes sense that archeologists would look here for answers about Japan’s past.

During the time that Fujiwara-kyo was the capital, the Taiho Code was implemented.  This code reorganized Japan’s government and based it on Confucian elements of governance, values, and ethics.  It also split Japan’s government into two entities, one side handled the spiritual, religious, and ritual matters, while the other half handled the administrative and secular affairs.

How Our Poop May Change Our Understanding of 7th Century Japan

In 2018, when a public prefectural housing complex in Kashihara was being rebuilt, the remains of an early flushing toilet system were found in what was once a 7th Century residential site.

The 7th Century version of a flushing toilet was a lot simpler than what we have today.  In short, the toilet works by connecting a flowing sewer system along with a city’s main road to a space where water can collect within a home or building. That space would have two sides connecting it to its source, one side for water flowing in, and the other for water flowing out and back into the sewer (downstream of course). Essentially, it would be like making a detour alongside an already flowing water system.

I think you can already imagine that the out flowing side is where you handle your “business” and the in side is where the water used to flush collected.

The Proof is in the Poo!

So, why is this important and how does it prove anything about foreigners living in Fujiwara-kyo?  As I said, the proof is in our poo.

In the soil, archeologists found traces of parasite eggs mixed into the remains of human stool.  The parasite eggs belong to a type of parasite found in pigs and sometimes cows.  It gets into humans when we eat pork or beef before it has been cooked thoroughly.

The parasite eggs are important because the only other places they’ve been found are at similar early toilet sites at the Korokan Ruins, an ancient reception hall used to entertain diplomatic missions in the 8th to 12th centuries, in what is now Fukuoka, and at the remains of the Akita Castle in Akita prefecture.

Recorded history shows that both Korokan and Akita Castle had foreign envoys, ambassadors, and diplomats who stayed there.  At the time, eating pork and beef was more common in China and the Korean Peninsula, especially for wealthy people like those who would stay in places like the Korokan or castles.

Because this type of parasite egg isn’t found at other sites where early Japanese people settled, archeologists suggest that it’s highly likely that there were Chinese and Korean people living in the building where the toilet was found.

This would make sense because of the fact that Fujiwara-kyo was a capital city at the time and because of all the cultural changes occurring at the time.  It’s known that foreign envoys would stay for short periods, but since their visits would be relatively short, it’s thought that they likely wouldn’t result in eating pork or beef brought from home unless their stays were much longer, or possibly permanent.

The presence of foreigners actually residing in a Japanese capital city like Fujiwara-kyo could change how we understand that era in Japan. After all, with all the cultural changes going on, especially as they stemmed from Chinese and Korean influence, it may make sense that foreigners were living in Fujiwara-kyo.

The excavated remains of the 7th Century toilet are now on display at the Kashihara Archeological Institute until March 18th, 2022.  Why not go check out an early toilet for yourselves!  I bet it’ll make you a whole lot more grateful for your own porcelain throne!