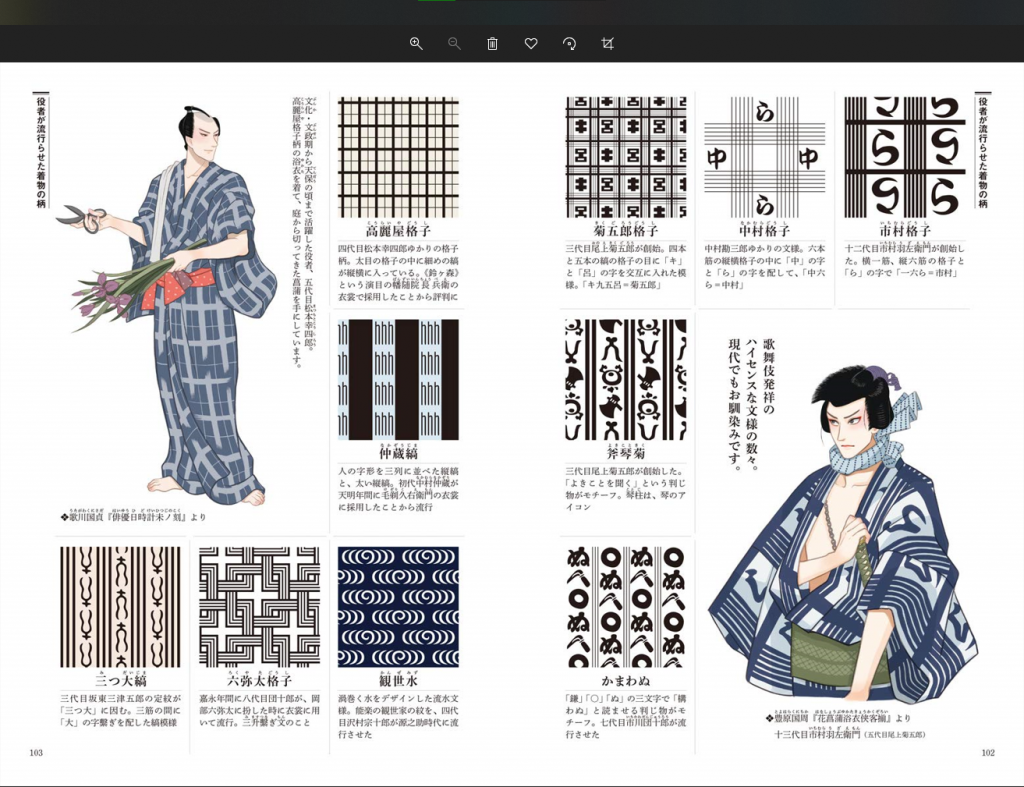 Japanese illustrator Rin Nadeshico translates fashion that was popular hundreds of years ago into the style of a modern clothing catalog.

Forerunners to Today’s Manga and Anime

Unlike the earlier Warring States era (戦国時代), which was a disruptive, unstable time, the Edo period (1603 ~ 1867) was a rather peaceful stretch that lasted for more than 200 years. This was a time when Japan was closed off to the West in self-imposed isolation. It is revered for its stylish culture that caused the fields of clothing, food, and housing to flourish.

Much of what is known about Edo period fashion comes from the interpretation of ukiyoe (浮世絵), or woodblock prints.

The most famous ukiyoe artists, Katsushika Hokusai (北斎葛飾) and Utagawa Hiroshige (歌川広重), were the Edo period equivalent of today’s successful illustrators.  They explored various genres but are most famous for their landscapes and depiction of famous kabuki theater actors.

While these artists and others accurately captured the “clothing culture” of the Edo period, individual pieces of clothing were not drawn in the style of a fashion catalog.  There is no means of cross-referencing data about a particular style of kimono, for example.  That was the inspiration for the artist.

Motivation of the Author

Born in 1984 in Chiba Prefecture, which is adjacent to Tokyo, the talented artist Rin Nadeshico tends to focus her illustrations and paintings on the themes of kabuki theater, kimono design, and traditional Japanese artwork from the Edo period.

She has been drawing since elementary school and originally aspired to become a manga artist.  Nadeshico graduated from design school in Tokyo in 2005.  There she learned graphic design and became friends with many young artists.  With the intention of “growing as an artist,” Nadeshico studied in Paris in 2009, which she used as a base to visit Italy, the UK, and Germany.

I want to express the beauty of Japan by my paintings and illustrations. Japanese traditional art is one of the most beautiful things in the world. I love Katsushika Hokusai…I was strongly influenced by its beauty.

Nadeshico, which must be a pen name, is related to the term yamato nadeshiko (大和撫子), which means “the personification of an idealized Japanese woman.”

You can learn more about the artist by visiting her website:  http://nadeshicorin.com/xx_english/top.html

You can also connect directly with her on Twitter:  https://twitter.com/nadeshicorin

Nadeshico has used her natural talent and training to develop a true work of art that is very easy to navigate.

Nadeshico has laid out the Oedo Fashion Illustrated Field Guide into four chapters.  Similar to the way in which a modern fashion catalog would be organized, each chapter is dedicated to the clothing worn by someone of a particular occupation.

The first chapter is devoted to commoners including town girls, young husbands, firemen, etc.  The second chapter is all about the social elite who were from samurai families.  It includes the elaborate dress of feudal lords, princesses, etc.  The third chapter depicts “people who live for their art.”  It highlights artisans, geisha, and kabuki actors.  The fourth chapter showcases people who worked in the entertainment district—mainly as prostitutes.

The illustrations are all based on actual ukiyoe woodblock prints, but the style and character designs have been updated to be more modern. Nadeshico has taken the artistic license to add bright colors and intricate details.

Edo Period Fashion Was Not Just about Kimono Design

The book is not just a collection of kimono illustrations.

Nadeshico has drawn the intricate details of many fashion “accessories.”  These drawings include the various types of topknots popular back in the Edo period. She also shows how to tie an obi belt, introduces a variety of traditional Japanese umbrella designs, and showcases various types of geta wooden shoes.

Although the Oedo Fashion Illustrated Field Guide was released in January 2021, it is now starting to gain traction in Japan.  One reader, Mikoto, remarked,

If you want to do a “deep dive” into the environment of the people who wore this fashion, a particularly appropriate place to visit is the Fukagawa Edo Museum in Tokyo. Learn more about it by reading “Experience Edo Era Tokyo – Fukagawa Edo Museum.”

The Oedo Fashion Illustrated Field Guide (お江戸ファッション図鑑) retails for 1,870 yen (approximately US $16.20) and is available at bookstores across Japan and online.  At present, Nadeshico’s book is still only published in Japanese, but there may be plans to develop a version written in English.