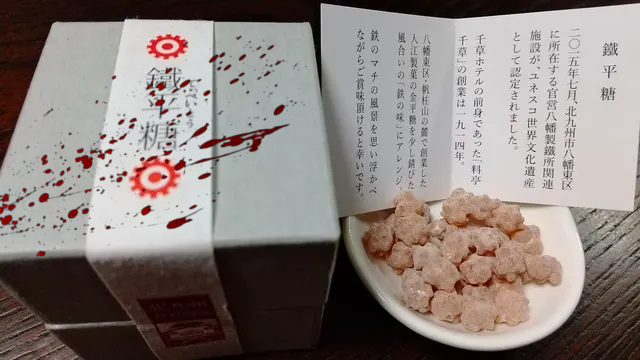 Called Teppeito, this special candy would give Mike Tyson déjà vu, bring temporary relief for Dracula, and may even help those with anemia.

What’s new:  In partnership with Irie Seika Confectionary Company the Chigusa Hotel in Kitakyushu, Fukuoka Prefecture has developed a curious type of colored sugar candy or konpeito (金平糖 from the Portuguese word confeito) that is sold under the brand name Teppeito (鐵平糖).  The te (鐵) of Teppeito is written with the classic Chinese character for iron.  Even when taken in small quantities, these tablets cause the sensation of having one’s mouth fill with blood.

Why it matters:  Teppeito, which has actually been around since 2016, recently got a shot in the arm—or mouth in this case—when news about the odd sensory experience that can be achieved by eating just one piece went viral on Twitter.

What they’re saying:  “All it takes is a single crystal of ‘flat iron’ sugar.  About 30 seconds after I put it in my mouth, it tastes like blood is spurting out of my mouth,” tweeted Uchaka in a tweet that has since been retweeted almost 20,000 times and liked by 60,000 people.

The big questions:  What is Teppeito “flat iron” sugar, and why would anyone want to eat candy that makes it taste like your mouth has been flooded with blood?

The candy was developed as a souvenir to commemorate the designation of the Yahata Ironworks as a World Heritage site.

What’s next: Due to popular demand, Teppeito may soon become available on Amazon.com.