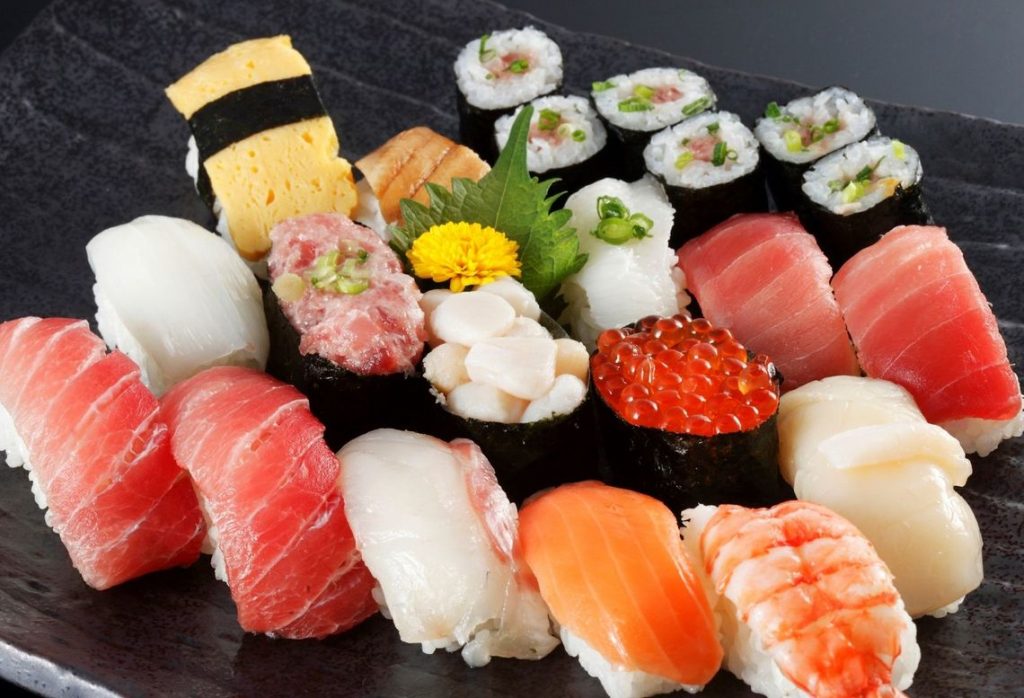 Japan is full of mouth-watering sushi, but where can you get the best? Check out the top 5 highest-rated prefectures for sushi!

When It Comes to Sushi, Freshness is Key

You might think that you’d find amazing sushi at every restaurant you go to in Japan, but contrary to the popular belief of most tourists, this isn’t always true.  Of course, the majority of the sushi you find in Japan is very fresh and tasty, but like any type of food, some places are just better than others.

When it comes to sushi, and we mean “real” sushi, not things like “California” or “dynamite” rolls, like all seafood, freshness is key.  This is especially true for sushi as the majority of the fish used to make sushi is eaten raw.  Some of the best sushi restaurants in Japan are found within steps of major fish markets where the daily catch comes in every morning or evening.

While freshness is the most important factor when finding good sushi, we also need to think about the fish themselves.  What I mean here are their habitats.  The main components of this factor involve the cleanliness of their habitat and the region of Japan the fish are caught in.  Put extremely simply, some fish taste better when caught in cooler waters than if the same fish were to be caught in warmer waters.  As for the cleanliness aspect, it goes without saying that the cleaner the ocean, the tastier the fish.

The way that different regions and more particularly water temperatures come into play will make more sense as we get into the top 5 prefectures for sushi list based on around 8,000 respondents to a survey.  So without further adieu, let’s get started.

In fifth place on the list is Shizuoka Prefecture, the home of the famous Mt. Fuji.  Shizuoka is located along Japan’s pacific coast just a couple of hours south of Tokyo on the main island of Honshu.

When it comes to sushi, Shizuoka’s coastal location means that its major fishing ports including Numazu, Yaizu, and Shimizu ports bring in the freshest fish and shellfish on a daily basis.  Depending on the season, Shizuoka Prefecture is most well known for tuna, known as maguro, gianchetti, known as shirasu, and sakura shrimp, which consists of dozens of tiny shrimp all stuffed into a sushi roll.

In fact, Shimizu Port is where half of all the tuna in Japan is brought in each year.  Thus, some of the best maguro can be found nearby the Shimizu Port in Shizuoka.

Sakura shrimp are tiny pink shrimp that are primarily only caught in Shizuoka’s Suruga Bay.  These tiny little tasty shrimp can be eaten raw, right out of the water.  Because they’re so tiny, you don’t even need to peel their short shells.  Raw sakura ebi is often consumed on top of a bowl of rice with soy sauce and wasabi.  As sushi, it is usually prepared as a gunkan, a sushi “boat” made by wrapping a bed of rice and its topping with seaweed.  Apart from sashimi, sakura shrimp is often eaten fried, or sometimes in pasta dishes as well.

Shirasu are small gianchetti, also known as whitebait, and are usually consumed raw or boiled.  Like sakura shrimp, shirasu is great on top of a bowl of rice or in gunkan form, with a simple touch of soy sauce and wasabi.

Fourth on the list is Niigata Prefecture.  While Niigata is also located close to the center of Honshu, it sits on the opposite side of Japan along the Sea of Japan’s coast.  Niigata is famous for its snowy and tall mountains and beautiful cliffs along its coastline.

In terms of sushi, the plentiful waters of the Sea of Japan provide Niigata with delicious fish and crab.  Niigata is known for tai, or red sea bream, maguro, yellowtail, known as buri, cod, and snow crab.

Buri caught off Niigata’s Sado Island is famous for its super fatty melt-in-your-mouth meat.  Of course, this means the sashimi is awesome.  In fact, the buri here rivals the fattiest of bluefin tuna.  Another popular way of consuming buri is buri-shabu.  Just like shabu-shabu beef or pork, raw cuts of buri are swished around a hot boiling pot of broth, cooking it instantly before consumption.

In the winter, Niigata’s snow crab, also often caught off the coast of Sado Island, makes for some great sushi.  Snow crab nigiri sushi is usually prepared with juicy pieces of crab meat boiled to perfection placed on top of a bed of rice.  Snow crab gunkan might pair some of that delicious crab miso with some of its meat.  I should tell you though, the “miso” is actually the “brains” or intestines of the crab, ground to look like miso.

Third on the list is Hokkaido with 11.1% of respondents voting for it.  Although the northern island is not technically referred to as a “prefecture,” Hokkaido is effectively the equivalent of a prefecture.  Japan’s northernmost island of Hokkaido has the best of “three” worlds when it comes to sushi because it’s surrounded by the Sea of Japan to the west, the Sea of Okhotsk to the north, and the Pacific Ocean to the east.  Hokkaido’s cold waters mean that all of the fish develop just a bit more fat, meaning a more delicious flavor.

Thus, Hokkaido is home to a wide range of seafood. However, it’s most famous for its delicious salmon, sea urchin, crab, and salmon caviar known as ikura.

Hokkaido’s uni is caught fresh throughout the summer and consumed right on the spot after cracking them open.  In autumn, Hokkaido’s famous ikura salmon roe is definitely something you need to try.  Ikura is usually consumed in gunkan form or on top of a bowl of rice.

Some people can’t imagine Hokkaido without thinking of its famous scallops known in Japanese as hotate.  Hokkaido’s jumbo scallops are so good and so fresh they’re often eaten raw as nigiri sushi.  Otherwise, they’re usually grilled up with butter and soy sauce.

You can also often find sushi platters or rice bowls with all of Hokkaido’s best seafood.  This means you get to taste everything including its famous ikura, scallops, uni, and salmon all at once!

Some of the best sushi can be found around the famous Yoichi fishing port, so add that to your list! You can also walk around it freely for the most part.

Second place goes to Ishikawa Prefecture as 14.3% of the respondents voted for it.  Ishikawa sits along the Sea of Japan’s coast slightly south of Niigata prefecture.  Ishikawa’s waters make for great seafood because it’s where two major ocean currents meet: the warm Tsushima current from the south and the cold Liman current from the north. In other words, it’s along the migratory path for many different kinds of fish.

Ishikawa is most well known for its snow crab, buri, amaebi spot prawns, Blackthroat Seaperch known as nodoguro, and oysters.

When it comes to sushi, Ishikawa’s amaebi, buri, and nodoguro are what people cite as the reasons why they think Ishikawa has the best sushi.

Amaebi literally means “sweet shrimp” and is praised for its delicious, sweet meat. It is usually eaten raw in the form of nigiri sushi just like buri and nodoguro.

Of course, many will say the best ways to enjoy fresh buri and nodoguro sushi would be as sashimi, many will also tell you to try the aburi sushi versions.  Aburi sushi is when a raw nigiri sushi’s topping, like nodoguro, is flame-seared using a blow torch to give it a quick blast of heat, blackening just the outermost layer of the tasty meat.  Trust me, it’s so delicious.

Toyama Prefecture took first place by a mile as 21.5% of people voted for it.  Toyama sits just east of Ishikawa along the Sea of Japan’s coast. Toyama Bay off its coast is one of the largest bays in Japan and it’s absolutely packed with fish because of the nutrients that wash into it from Toyama’s massive mountain ranges as well as all the nutrients that are carried by the colliding currents in the Sea of Japan that are forced into the bay.

Like its neighbor Ishikawa prefecture, Toyama is also famous for nodoguro sushi as well as shiro ebi (white shrimp) and firefly squid, all of which are plentiful in Toyama Bay.  Tuna, salmon, and buri are also famous here.

Toyama Bay is the only place where shiro ebi is commercially fished, making them a rare treat known as the “jewels of Toyama Bay.”  While they are prepared in many ways, most people agree that the best way to enjoy them is raw, fresh out of the ocean.  Just like sakura shrimp, they are eaten as gunkan sushi most of the time.

The firefly squid of Toyama Bay aren’t just famous for being delicious.  The tiny squid that usually live in extremely deep waters migrate to the shallow bay to spawn.  They’re called firefly squid because at night they glow blue and light up Toyama Bay.  It’s truly amazing.

When they’re not glowing, they’re enjoyed as sashimi on top of a bed of rice. Since they’re caught right offshore, firefly squid sushi in Toyama is some of the freshest squid you can eat in all of Japan.

While many cite Toyama’s shrimp and squid as their favorites, Toyama’s waters provide all kinds of tasty sushi including the sought-after nodoguro, buri, tuna, and salmon.  Sushi restaurants can be found along the coast and around its fishing ports like the Namerikawa port.

Make sure to add some of these places to your list the next time you visit Japan.  You won’t be disappointed.