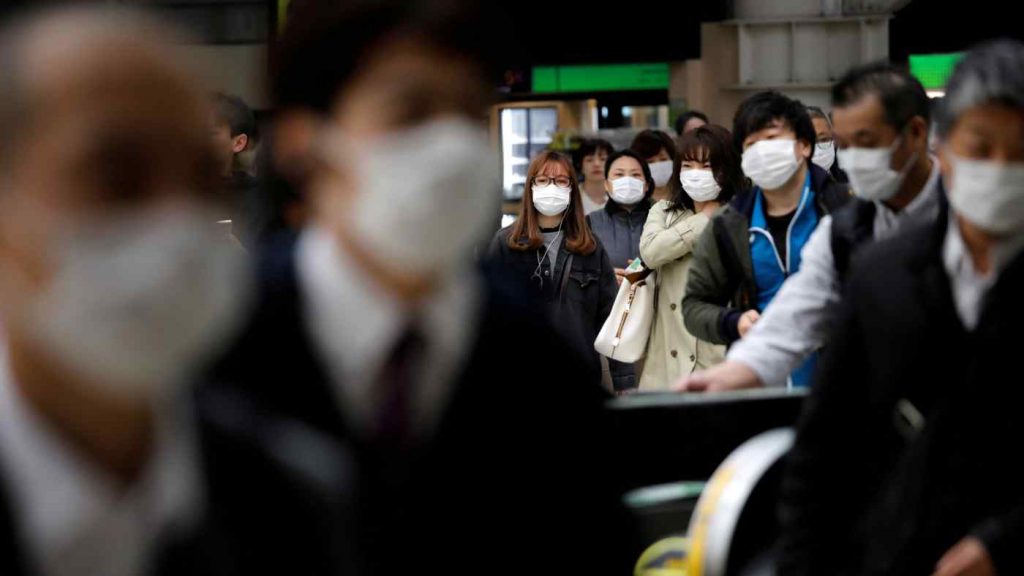 Government Announcement about Masking up

It may soon become socially acceptable to ditch the mask outside when certain conditions have been met—at least based on a recent announcement by the central government.

Announcement by the Chief Cabinet Minister

…wearing a mask as a measure against infection by Covid is not necessary outdoors, if sufficient distance can be maintained.

This may seem like old news to many living in parts of the world that have already done away with mandatory requirements to mask up when outside, but in germophobic Japan, this statement was an eye-opening revelation.

Rational for Ditching Masks Related to the Fear of Heat Stroke

While Japan is just about to enter a month-long stretch of generally cool and wet weather typical during the annual rainy season that usually lasts until the middle of July, it is only a matter of time before the country once again becomes wrapped in the notoriously hot and humid conditions of the summer.  Thus, Secretary Matsuno justified this position because,

…when temperatures and humidity are high, wearing a mask increases the risk of heat stroke.

This is true and a real concern in Japan—especially among the sizeable elderly segment of Japan’s population.

It is also a growing concern for children.  Therefore, the government has advised everyone to be alert when people’s faces become flushed and they start to breath heavily while wearing a mask.  As these signs could be precursors to heatstroke, government representatives have reassured the public that removing one’s mask at that point makes sense.

Secretary Matsuno has been backed up by leaders in the medical profession.

Asked at a press conference on May 11 what he thinks about the wearing of masks, Dr. Takashi Wakita, director of the National Institute of Infectious Diseases, who chairs the Advisory Board that advises the Ministry of Health, Labor and Welfare on measures against the new coronavirus, said,

Of course, there is no need to wear a mask outdoors, when socially-distanced, and when there is no conversation.

When you are outdoors and walking in an area without many people, it is important to remove the mask so that you can get some fresh air.

That said, Dr. Wakita was careful to note,

Wearing a mask is one way to reduce the risk of infection…You should continue to wear a mask in situations where you have to talk indoors.

Just as Japan is the last of the developed countries to re-open its borders to tourists—a milestone in the pandemic now expected to begin in June—it is likely that it will take a while for this guidance to sink in. That is partly because Japanese people were used to wearing masks in public well before the coronavirus arrived in Japan.

Culture of Masking up Predates Covid in Japan

Predisposition to Mask up

Well before the advent of Covid, it has been common for Japanese people to wear a mask in public.

A study by Kaoru Sekiyama, professor of cognitive science at Kyoto University, has determined that the differences in “mask culture” between Japan and the West may have sprouted in infancy.

Sekiyama and his colleagues concentrated their research on which parts of a person’s face people pay attention to during conversation. Japanese adults look mainly at the eyes, while English-speaking Westerners focus their attention on the mouth.

One theory is that the difference in the parts of the body seen during conversation is due to the contrasting linguistic structure of Japanese and English. Japanese has fewer types of vowels and consonants, and there are fewer clues to read words from mouth movements. Emotions and nuances are read from the eyes.  As the saying goes,

The eyes speak louder than the mouth.

On the other hand, English, with its many consonants, is easier to understand accurately by looking at the mouth because the mouth moves in various patterns.

Thus, there has been little resistance to covering one’s mouth with a mask in Japan.

The Japanese have, in fact, been wearing masks in public since the early days of the Meiji period (1868~1912).

The first direct link to the mask as we know it today appeared in 1836. A British physician named Jeffries developed it as a “respirator” for people with respiratory ailments. It was similar in shape to the masks we use today, with cloth covering the nose and mouth, and strings attached to the ears.

However, there was a metal lattice inside, and when you exhale, the temperature and humidity were maintained there, allowing you to breathe in warm, moist air. The Jefferies respirator was exhibited at the second World’s Fair in London in 1862.

The respirator entered Japan by about 1877. At least one advertisement for the respirator from 1879 is documented. At that time this new innovation was, curiously, not intended for medical professionals.  The main target was the general public.  These early masks were almost universally black, and they became a popular fashion item in Tokyo and other urban areas, according to Tomohisa Sumida, a visiting researcher at Keio University’s Faculty of Letters.

From 1898 to 1902 the wearing of masks also became popular in Tokyo. It seems that the purpose was to protect against the cold.

Then, with the influenza (Spanish flu) pandemic that began in 1918, many people in Japan began to use them to prevent infectious diseases.

The custom of Wearing a Mask When Serving a Meal

Around 1938, when the Sino-Japanese War began magazines published images of students wearing masks at school to make supplies to be sent to the war zone. After World War II, the use of masks as a hygiene practice when serving school lunches may be a remnant of this practice.

With Japan’s rapid economic growth, air pollution became more serious in many parts of the country starting in the 1960s, and in the 1980s, hay fever began to explode. As a result, masks became more and more commonplace.  Now you may not consider hay fever to be such a big deal, but it is in Japan.  Check out “Hay Fever Attacks Nearly 40% of Japan’s Population” for more details.

Despite the tendency for Japanese people to communicate with their eyes, concerns about how the deaf have suffered during the ongoing pandemic have led to the development of a wide variety of transparent masks.

In keeping with the country’s tradition of continuous improvement, the latest transparent masks help the deaf to be able to read lips even while someone is masked-up.

Like in other parts of the world, there are lots of public service announcements and posters which aim to remind people about the proper way to wear a mask.

This advertisement, which cautions against tucking a mask under one’s nose, says,

So, what did the Japanese public think about the relaxation of mask-wearing guidelines from the central government?

Although not quite to the extent found in other countries, the general public seems, in general, to be receptive to the government’s new position.

The popular governor of Osaka who has gained support for his strong leadership throughout the ongoing pandemic, 46-year-old Hirofumi Yoshimura, was quick to voice his support for the easing of social norms regarding wearing a mask outdoors.

Many will take their clues from his leadership.

Alignment with the Rest of the World

More than 20 countries have eliminated all requirements for wearing a mask in public, beginning with the U.K. in January.  Norway, Denmark, and a number of Eastern European countries quickly followed.  In other countries, the rules have been eased with only limited requirements still in place.

While Japan will, most likely, continue to do its own thing, the influence from abroad is likely to chip away at the self-regulated compliance of the mask-wearing culture in Japan.  Once Japan re-opens its doors to tourists beginning in June, the debate about the ongoing need to wear a mask in public will likely intensify.