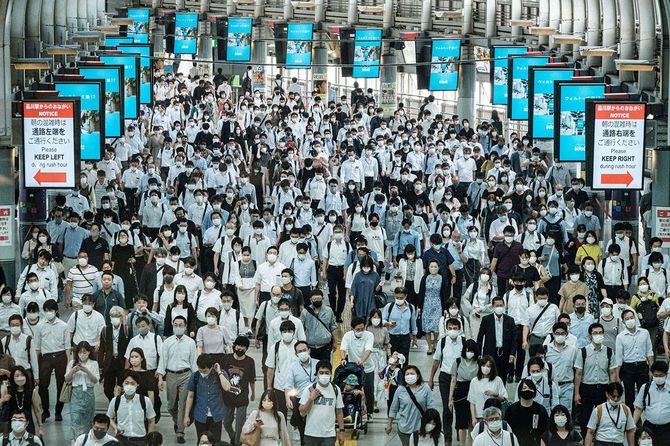 The Growing Problem of Population Concentration in Japan

A new way of looking at the data graphically has confirmed that almost all of Japan can be considered as virtual “flyover country.”

How Crowded Is Japan?

Conventional wisdom among “coastal elitists” in the U.S. is that virtually the entire region between New York and Los Angeles is a “flyover country.” Especially as someone from “America’s Heartland,” I don’t take too kindly to that label. This derogatory term has its roots tied to population density, which does, in fact, tend to be relatively low in much of the area in between the megacities on America’s East and West Coasts—with some major exceptions such as Chicago and Houston. That does not, however, mean that there is no need simply “to fly over” the middle part of the United States. It has much to offer.

If your primary impression of Japan comes from the evening news, then it is safe to say that images of the ultra-crowded Shibuya “scramble crossing” probably dominate your psyche.

While good for provocative sound bites, does this image accurately due justice to issues that affect the population of Japan?

The Japanese are rightfully quite sensitive to issues that concern their population.  The country has the “world’s oldest” population of senior citizens, who now comprise almost 1/3 of the overall population.  The annual number of deaths now far exceeds the number of babies that are born each year.  As highlighted in Japan Insider’s recent article “Japan’s Population Crisis Darkens as Marriage Levels Hit an All Time Low,” too few Japanese are saying, “I do” and subsequently having babies.

This demographic time bomb is now causing the overall population to decline from a peak of 128 million in 2008 and now seems to be in free fall.

Unless the Japanese government decides to invite a large number of young foreigners into the country and allow them to settle in Japan, something which is highly unlikely, these disturbing trends are likely to continue for the foreseeable future.

Japan’s National Institute of Population and Social Security Research estimates, in fact, that the population will fall to only 100 million people by 2049.  By 2100 Japan’s population is likely to be only a little above 50 million.

Where Do All of Those People Live?

Another important story is, however, where all of those people live.  It turns out that Japan’s population is not evenly dispersed throughout the country—far from it.

Approximately 37.5 million people are crammed into the relatively compact area of the Kanto Plain, the largest flat area in Japan and home to Tokyo.  That means that roughly one of every three Japanese currently live in Tokyo proper or the surrounding prefectures of Chiba, Gunma, Ibaraki, Kanagawa, Saitama, and Tochigi.  This area now constitutes the world’s largest mega-city.

Although the coronavirus has, apparently, temporarily stunted the relentless growth of central Tokyo, net annual migration into the capital is likely to resume once the global pandemic is brought under control.

Where Is Population Concentration Most Acute?

While the Japanese government publishes copious amounts of data and reports about shifts in population, it took an amateur cartographer who was simply playing with the data to stir up a major controversy.

On February 6, 2022 Nanowani published a series of maps that shocked thousands of his fellow citizens. They were unaware of just how concentrated the population of Japan is among only a few metropolitan areas. Nanowani tweeted,

Here is the result of plotting graphically the population density of exactly half of the entire population of the country by municipality (red indicates the highest density, orange high density, and the geography in white accounts for the other half of Japan’s population).

The problems associated with the phenomenon of “concentration in the Tokyo Metropolitan Area,” known as Tokyo ikkyoku shuchu (東京一極集中) in Japanese, have been known for a long time, but this map developed by an amateur cartographer from Osaka caused shock waves to reverberate through the Twittersphere in Japan.  To date, this tweet has been retweeted almost 40,000 times and obtained more than 150,000 likes.

It hammered home just how acute the problem has become, as there certainly seems to be a lot of “flyover country.”  Did Nanowani make a mistake?

Considering that more than 3/4 of the country is mountainous, intuitively this makes sense.  Photographs do not lie.  Nanowani raised several other provocative points that have challenged conventional wisdom.

Nanowani, who has always had an interest in geography, noticed some other surprising results from his analysis, too.  He explained,

I think the diagram shows that the population is quite concentrated in the three major metropolitan areas (Tokyo Metro, Kansai Metro, and Nagoya Metro).  Even among the most populous cities, I was struck by the fact that Sendai, Hiroshima, and other places with vast mountainous areas had lower population densities than I had imagined, while cities and towns that did not merge around major cities had higher population densities. Since the population densities are based on the units of cities, towns, and villages with various areas, I think it was interesting to see the discrepancy from the image.

This is quite insightful. Although they have large populations, the cities of Sendai and Hiroshima must feel more spacious than the cities with high population density such as Sapporo Kita-Kyushu.

One of the cities that surprised many because its population density was enough to make the cut and, therefore, garner an orange shade on Nanowani’s map was Naha, Okinawa.

Whereas slick travel advertisements for Okinawa tend to feature images of pristine beaches with just a couple or two, the reality is much different.

Anyone who has driven through the city during rush hour can, however, tell you that Nanowani’s findings are really no surprise.

As the old saying goes, “Life is a trade-off.” Except for the truly wealthy, competition of limited resources severely affects living conditions in Japan’s areas of high population density.

Competition for Limited Resources in the Capital

While there is no doubt that Japan’s biggest cities offer much potential including a palpable electric energy which makes anything seem possible, the highest paying jobs, and a vibrant cultural scene, competition for limited resources such as land can be cut-throat.

With more than 1,300 locations across the country, perhaps Mister Donut will come to Tokyo’s rescue.  Seriously, this is a real problem for Japan’s most densely populated regions.

Hollowing out of the Countryside

Like America’s “flyover country” all that white space on Nanowani’s map suffers from the problems that typically accompany a declining population.  They face the vicious cycle of dwindling tax revenue which slowly erodes local communities over time.

There are, however, other options.

Will Japan Ever Get Its Own “Canberra” or Something Like It?

Canberra, the capital city of Australia, is famous for being an entirely planned city. The decision to build in that particular spot was, apparently, born out of a compromise among powerful political forces that had been vying to establish the seat of government in either Sydney or Melbourne. Construction started in 1913, and the rest is history. Not only is Canberra a beautifully laid out urban area, but it is also now considered to be one of the most livable cities in the world by its 400,000+ inhabitants.

Could Japan ever develop its own version of Canberra? While the answer is a resounding “Yes!” don’t hold your breath.

This concept of shutokinoiten (首都機能移転), or relocation of the functions of the central government out of Tokyo, has been on the table for decades, but no meaningful progress has been made thus far.

These plans sound good in theory, but they are unlikely ever to see the light of day.

Not everything is, however, all doom and gloom. Especially as the global pandemic has caused urban dwellers throughout the world to reconsider their priorities, more and more individuals are taking a closer look at the value of life in the country.

John F. Kennedy’s famous call to action “Ask not what your country can do for you but what you can do for your country” certainly comes to mind.  If you play your cards right, there may, moreover, be a way for you to get paid to move to the countryside.

Some rural municipalities are so desperate for new blood that they have developed some lucrative financial incentives to get young urbanites to relocate.  Check out the Japan Insider article from last summer entitled “Get Paid by the Japanese Government to Move to the Countryside” for more details.  Especially if you are now a remote worker, you may be surprised to find that some of these incentives make a lot of financial sense.

You can use the separate piece “Living in Tokyo vs. the Countryside” to judge for yourself.

Keep in mind that you may be able to find that perfect “fixer-upper” for pennies on the dollar.  Check “Transform Japan’s Abandoned Property into Your Dream Home” for more details.

For most of the past quarter of a century, my family lived in the middle of one of Tokyo’s densely populated neighborhoods shaded in bright red on Nanowani’s map.  Although the crowds could, at times, be a bit overwhelming—especially during the daily commute–there is no doubt that the opportunity to live in Japan’s capital provided plenty of stimuli. A few years ago we relocated to part of Japan’s “flyover country.”  We have no regrets and relish the extra space!