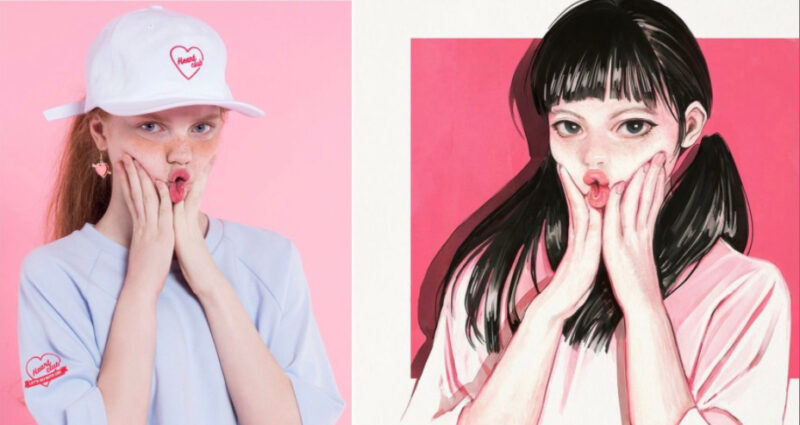 Outed for stolen art… and being a man? This famous illustrator has a closet full of hidden secrets.

Have you ever heard people say, “fake it till you make it?” While this strategy may work in some cases, it also has the potential to backfire.  At the end of the day, it either works, or it doesn’t.  However, for a popular Japanese illustration artist named Tsumi Koto, faking it did not work in the long run.

Another key component of the saying “fake it till you make it” has to do with the “till” part.  You see, Koto didn’t just fake it until he made it, he continued to fake it long after he “made it” in the art world.

Known for his work as an illustrator, Tsumi Koto’s pieces were once often found in gallery exhibitions, posters, billboards, and most commonly, on clothing.  Koto’s artistic style utilized anime-esque illustrations often depicting women.

When I say “Koto’s pieces were once found” in galleries and clothing etcetera, I’m referring to the fact that he was recently outed online in January for copying his work from other images and profiting off of their work without crediting them.  However, the story got even crazier when during all the backlash for his traced illustrations, Twitter users also found evidence that the young, charming woman “he” had portrayed himself to be was actually a 45-year-old man… if that sentence even sounds right.

Now, Koto is facing all sorts of copyright infringement violations and social media posts about his “traced” work continue to pop up.

Firstly, internet users on Twitter and YouTube outed Koto making his illustrations by tracing pictures of women taken by photographers.  One YouTuber known as KoreKoreChannel posted an hour and a half live stream video proving that Koto’s work was traced by dragging slightly opaque photographs above his illustrations to show they were identical. Koto sold some of these illustrations in the past for more than 150,000 yen or ($1,300 USD).

On top of this, on Twitter, users were quick to find original photographs that Koto had traced and posted them side by side for the world to see.  Following this, Koto was dropped from two upcoming projects that his illustrations were featured in.

It’s unclear whether any more of Koto’s past work will also come up as “stolen” in the midst of this, but at the moment, he faces various copyright violations due to his intentions to profit off of “his” work.

Both ANARC and PUBLIC TOKYO canceled and made statements apologizing to customers who had already preordered pieces of clothing in the light of Koto being outed as a fraud.  Both parties outlined that they would be fully refunding everyone who had already made payments.

The story doesn’t end here, however.  As I said, it only gets crazier.  Koto’s illustrations weren’t the only things that he “faked.”

Until now, when “Koto” would appear in public, he was a young woman.  Obviously, this wasn’t the real Koto.  It turns out that Koto would have his young female assistant appear in his place at exhibitions or at “meet the artist” events for autographs and more.

Internet users doing what they do best, at least, when they aren’t arguing with each other on social media or in forums, tend to be able to find almost everything there is to know about a person.  These “investigators” combed through Koto’s Twitter account to look for any clues that would act as solid evidence to help their case.

Not only did they find out that it wasn’t him, but his assistant that appeared at public events, they found out that he was a man born in 1976 and even found photographs of the real Tsumi Koto.  One was a picture of him with his family, and the other was a “slip up” where Koto himself posted a picture where the “real him” was caught in a reflection.

It’s safe to say that things just don’t seem to be working out for Koto at the moment.  What do you think?  Is it fair for him to claim that some of his works are “homages” to other people’s work?