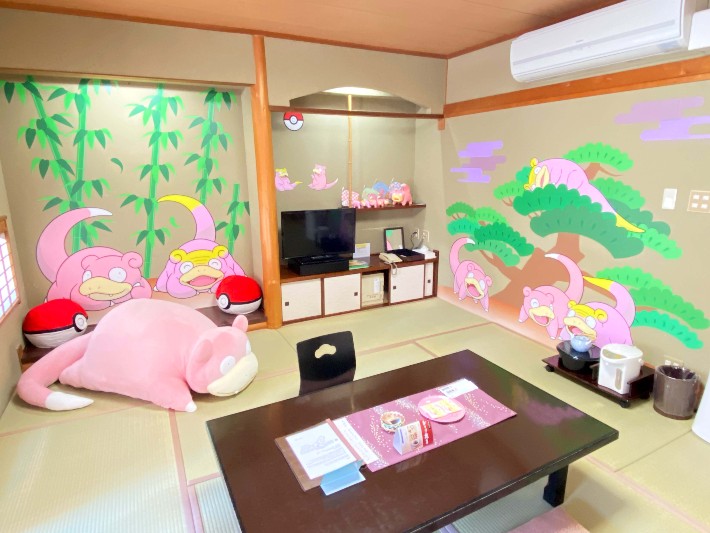 Stay in a cozy Slowpoke-themed hotel room in one of the Pokemon hotels in Kagawa Prefecture, Japan. Gotta catch ’em all!

A Message to all Pokemon Fans!

Are you a Pokemon fan?  Want to visit Japan someday?  Or, maybe you are already in Japan… and just happen to be a Pokemon fan in the land that created them.  Either way, do I have a suggestion for you!

The Pokemon Hotels!  What I mean by this is that you can stay inside Pokemon-themed hotel rooms in Kagawa Prefecture, Japan.  Specifically, if you happen to like water and psychic type Pokemon, then you’ll be happy to hear that images of the big, pink Pokemon known as Slowpoke can be spotted not only within hotels but everywhere across Kagawa Prefecture including ferries, busses, and even mailboxes!

In other Slowpoke-related news, the official “Pokemon Kids TV” YouTube channel released what might be the single greatest promotional video ever made by a local government office.  It features a life-size Slowpoke dancing around Kagawa Prefecture’s most beautiful places as senior citizens lip-sync along to a super catchy Slowpoke (Yadon in Japanese) themed reggae theme song.  If this doesn’t make you want to visit Kagawa Prefecture, I don’t know what will.

Before we get into detail about the Slowpoke hotels, everything would make more sense once you know that Slowpoke was chosen as Kagawa Prefecture’s official Pokemon mascot (yes, many prefectures in Japan have one). The reasoning behind choosing Slowpoke is due to its Japanese name, Yadon, being very close to Kagawa’s signature dish, Udon noodles. Yadon. Udon. See the resemblance?

Anyways, Kagawa Prefectures local government officials announced that as of February 4th, 2022, people will be able to stay in Slowpoke-themed hotel rooms at the Takamatsu Tokyu REI Hotel, the Kotohira Onsen Kotosankaku Hotel, the Marugame Plaza Hotel, and the Shodoshima International Hotel.  So far, each hotel has one Slowpoke-themed room.

All reservations can be made on each of the hotels’ websites, or on the phone.  Hopefully, you can plan your next vacation to Kagawa Prefecture and stay in a Slowpoke hotel room!